skip to main | skip to sidebar

I am always encouraged when you leave comments, and even more encouraged when LDS readers leave a comment. Thanks friends for taking time to leave your comments here. I also appreciate that the tone is courteous. :) Thanks!

I wanted to take a moment and respond to a comment left here in response to my post on the Bible.

First of all, I wish to thank Seth for taking time to stop by my blog and sharing his thoughts about the Bible. I have visited enough blogs and sites that are similar to mine to know that the comments left are not always shall I say "kind". :) Thanks Seth for your courteous sharing.

I just wanted to take a moment and respond to Seth's comment, about "not having to believe the Bible is inerrant -- that is without error-- to believe in the Bible and it's message. "

I want to point out to Seth and other LDS readers who may actually read the Bible , is that no where in the Bible does it state by any of it's writers that it contains errors. Not one place that I know of. On the contrary the Bible declares that God's word shall accomplish what is sets out to do ( to share the message of salvation thru Christ) and that it shall prosper in the thing that God sends it out to do.

" So shall my word be that goeth forth out of my mouth, it shall not return unto me void, but it shall accomplish that which I please, and it shall prosper in the thing whereunto I sent it." Isaiah 55:11

God's Word, is found in the Bible. It shall accomplish that which He desires and shall prosper. God reveals Himself to men by His Word, which shall not return to Him in vain. ( void) The Word of God therefore, accomplishes His purposes by announcing salvation to all mankind. Thus the great need and importance the world has, to read the Bible.

" Declaring the end from the beginning and from ancient times the things that are not yet done, saying: "My counsel shall stand, and I will do my pleasure.... yea, I have spoken it I will also bring it to pass, I purposed it, I will also do it."

He speaks thru His Word and what He declares and has declared shall come to pass. We see that over and over again thru the Biblical prophesy. Prophesies about our Lord's birth, life, and eventual sacrifice was prophesied years prior. What God has declared in His Word, has come to pass. There is yet things to come to pass as well. His eventual return for His Bride, The Church is something we look forward to as believers. What God has spoken is found in the Bible. It shall truly come to pass , if it has not already been fulfilled.

The concern I have with the LDS view that the Bible is not inerrant, and does have errors, is that "if" that is the point of view the reader has about God's word -- then how can the reader of the Bible truly come to trust God? How can one "trust" something that it believes contains error? To say The Bible contains errors is to declare God is a God of errors. As I mentioned earlier, The Bible does not declare itself to be a book that contains errors. The writers of the Bible, were inspired by God.

" ALL scripture is given by inspiration of God, and is profitable for doctrine, for reproof, or correction for instruction in righteousness. " 2 Timothy 3:16

This refers to the supernatural guidance of the writers of Scripture by the Holy Spirit, so that what they wrote was the divine Word of God, transcribed accurately, reliably, and without error in the original manuscripts. The word "inspiration" itself pictures God "breathing" out His Word to men. Since the scriptures are given to help Christians grow in their walk with the Lord, they should rely upon them for doctrine, reproof, correction, and instruction in how to live correctly.

" Knowing this first that no prophesy of the scripture is of any private interpretation. For the prophecy came not in old time by the will of men, but holy men of God sake as they were moved by the Holy Ghost." 2 Peter 1:20-21

The scriptures were written by holy ( holy in Greek and Hebrew means "set apart") men, or men "set apart" by God to write His Word. While in no way denying the individual personalities of the writers, or rejecting the distinctiveness of their particular styles, the Holy Spirit controlled the process of bringing things to the writer's memories. ( John 16:13) and ensuring what they recorded was the very Word of God. For example, Jeremiah once became so frustrated with the work God called him to do, he wanted to quit. But God's Spirit compelled him to go on. ( Jer. 20:9) Jonah also at first refused God's call to preach in Nineveh, but later obeyed. ( Jonah 3:1) As Christians we can read the Bible and be confident that this is the very Word of God.


When I was LDS, I regarded for many years the Bible with suspicion. I had been taught that the Catholic Church had thru the years ( middle ages and early Church years) meddled with it and had taken out plain and precious truths. I was led to believe that it was not reliable, and had errors, at times significant errors. ( case in point the passage in John 3 that states God is a Spirit, that is not a man. The LDS declare that to be an "error" or mistranslated.) When I began to read the bible in earnest, I read with sincerity, wishing to read it in it's entirety. I began my study with a sincere desire to read and understand. An amazing thing happened in the process. My eyes were opened, and I came to know and understand WHO Jesus was and is, and Who God is and Who is the Holy Spirit. My eyes and heart were further opened to realize, that NO where in the Bible is there any such command to join a particular church or that one has to have membership in some religious organization to gain eternal life. No, after reading the Bible, it was so clearly laid out to me that JESUS IS THE WAY. Jesus preached Himself, He did not preach a religious denomination. It was so very simply laid out.

My concern for Seth and other LDS readers is that they have been taught that the Bible contains errors. First of all, as I stated earlier no where does the Bible state that as it does in the Book of Mormon, and secondly we have texts today, ancient manuscripts that point out to us that there isn't errors as the LDS teach. The Bible can be trusted. It is not in error. Another book I highly recommend is the book : Evidence that demands a Verdict by Josh McDowell. This man , was an atheist when he began to study the Bible. He began it's study with the intent to prove it's falseness. In the process of studying God's Word, He was proved of it's truth! A wonderful and very intense book for those Bible critics out there.

If one truly believes The Bible is God inspired, not of " private interpretation" or "mistranslated" then one can come to understand and know that Jesus , The Messiah is the ONLY means by which man can inherit eternal life.

I challenge my LDS readers to perhaps consider picking up a non - LDS version of the Bible, that does not have the Joseph Smith translations and read for one self. There are many wonderful modern translations of the Bible, and yes they are reliable. The New KJV and NIV Bibles are reliable and wonderful translations. Pick one up and give it a try. I promise you that if you read with a sincere heart you will be changed. God's Word is just that powerful.

Seth, thanks again for sharing and for the opportunity to respond to your comment.

Labels: responding to comments, The Bible

Hello and thanks for taking time to read my blog and for leaving a courteous comment.:) May God bless you!! 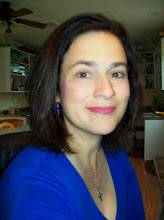 Who am I and what is this blog about?

Hello & welcome. Thank you for taking time to stop by and for reading my blog. My name is gloria and I spent 19 yrs as a faithful & active member of the Church of Jesus Christ of Latter-day Saints, or more commonly known as the "Mormon Church". In the fall of 2007, I completely surrendered my life to my Lord , King Jesus. Since that time the Lord has placed in my heart a great burden to share the good news of Jesus Christ with my friends and loved ones in the LDS church. This blog was birthed in response to that desire. My prayer is that this blog glorifies and exalts the Lamb of God. I also hope to help the body of Christ understand their LDS friends, their doctrines and culture and hopefully equip them with tools to help minister and witness to them the good news. Please feel free to leave a courteous comment. I would love to hear from you!
God bless you!